A bit ago I saw someone saying that the first prototypes of chess involved rolling dice, at which point i did no research to back up this claim, said to myself "that sounds like fun to make", and opened Unity.

HERE'S HOW THIS WORKS:

To move your pieces, you will select the piece you wish to move, select the direction of motion, and then roll a die to determine how far that piece moves in that direction. Could be an 8, could also be a 1. Different pieces use different die according to their movement patterns.

When you attempt to capture a piece, you will roll a 12 sided die and then your opponent will roll a 12 sided die. Whoever rolls higher here will capture the other piece, making it entirely possible for you to try to capture your opponents piece on your turn and wind up losing your own instead. Each piece has a modifier they add to this roll, making it slightly more difficult to capture a strong piece like a queen with something like a pawn.
The modifiers for these rolls are:
Pawns and kings: 0
Bishops and rooks: 1
Knights: 2
Queens: 3

Other than all of that, the basic rules of chess still apply! Capture the opposing king to win the game. Happy rolling!

knight's second move just phased with the other king lol

There are a lot of interesting things going on here! The addition of randomness really changes the game. And again I realize how little I recall about chess XD

This is great. I need to play this with someone soon, preferably someone who is really good at chess.

I did notice a weird glitch though? I played a quick game and rushed one of white's knights to take out the king. The white capture roll was the bigger number and got the capture, but for some reason the animation of the black king capturing the knight played. The game still ended and said white won, but for whatever reason the wrong animation played.

Not a huge issue since the game still worked (I honestly wondered if it was intentional, like playing the wrong animation at the end is part of it? But a repeat play didn't do it again), but figured I'd mention it. No idea what could have caused it though or how to duplicate it. 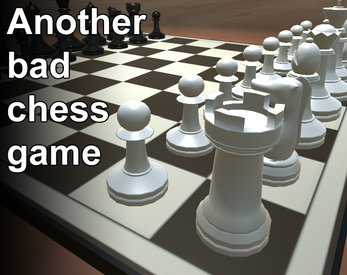